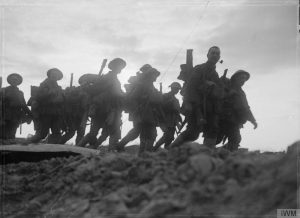 The congregation at Craignish Parish Church on 9 April 2017 remembered that 100 years ago on that day the Battle of Arras began. It was one of the bloodiest battles of the First World War with some 159,000 allied troops losing their lives and a daily casualty rate of more than 4,000. Among those killed were two local men, Peter MacGilp from Craignish who died on 16th May 1917 aged 21. He has no grave but is remembered on the Arras Memorial and on the family stone at Kilvaree. And Duncan Campbell from the Isle of Shuna, who died on 23rd April 1917 aged 20 and is buried at Duisans British Cemetery, Etrun. Both Peter and Duncan were serving with the Argyll and Sutherland Highlanders. 44 of the 120 battalions on the British frontline were Scottish. Church of Scotland Moderator Russell Barr led the centenary commemoration service at the Faubourg d’Amiens Cemetery in Arras. The prayer he used on this occasion was included in the prayers at Craignish Parish Church.

God of time and eternity

speak to us in the silence of our remembrance

of Your promise of a new heaven and a new earth.

Weaving together past sorrow and future hope

help us be mindful of the debt we owe others

and of the opportunities which lie ahead

As we recall the terrible cost of war

in particular the price paid at Arras

by those who served here

let us also recall Your command to love our enemy

and care for our neighbour.

Renew our faith in Your unchanging purpose of love

and embrace us and all for whom we pray

in that peace which passes all understanding

in Jesus Christ our Lord. Amen