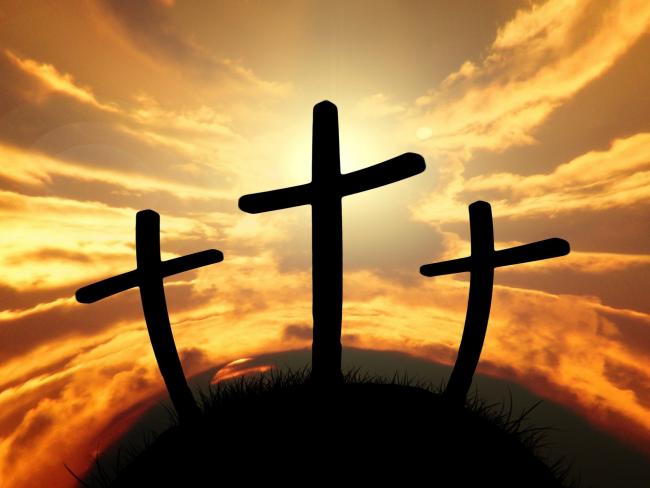 Today, at 12 noon, we will be broadcasting a meditation for Good Friday, led by Maura Rae, with music and pictures.

This will go live on YouTube at noon and can be accessed via the following link: https://www.youtube.com/watch?v=rVxFMy6i_1E&feature=youtu.be

Some Good Friday activities to do at home can be downloaded here: Holy-Week-and-Good-Friday-from-Godly-Play-UK.

I invite you to a meditation for Good Friday I will lead using some pictures I painted for last year’s event. Scripture references are in italics and are taken from the New Living Translation. The first three are on a theme of ‘feet’.

In John’s Gospel we are told that after the raising of Lazarus from the dead In Bethany the religious leaders decided that Jesus must be put to death. Jesus knew this and set off for Jerusalem for the last time. John chapter 12 picks up the story.

Six days before the Passover celebration began, Jesus arrived in Bethany, the home of Lazarus – the man he had raised from the dead. A dinner was prepared in Jesus’ honour, Martha served, and Lazarus was among those who ate with him. Then Mary took a twelveounze jar of expensive perfume made from essence of nard, and she anointed Jesus’ feet with it, wiping his feet with her hair. The house was filled with the fragrance. But Judas Iscariot, the disciple who would soon betray him, said, ”That perfume was worth a year’s wages. It should have been sold and the money given to the poor.” Not that he cared for the poor – he was a thief, and since he was in charge of the disciple’s money, he often stole some for himself Jesus replied, “Leave her alone. She did this in preparation for my burial. You will always have the poor among you, but you will not always have me.”

We do not know what essence of Nard smells like but we invite you to find a perfume you like and allow yourself to enter in to that situation. What would you be feeling or trying to say if you were the one doing the anointing? 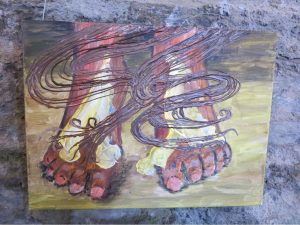 2. Jesus washed his disciple’s feet at the last supper:

John 13 describes what happened; It was time for supper and the devil had already prompted Judas, son of Simon Iscariot, to betray Jesus. Jesus knew that the Father had given Him authority over everything and that he had come from God and would return to God. So he got up from the table, took off his robe, wrapped a towel around his waist, and poured water into a basin.

Then He began to wash the disciples’ feet, drying them with the towel he had around him. When he came to Simon Peter, Peter said to him, ”Lord, are you going to wash my feet?” Jesus replied, ”You don’t understand now what I am doing , but someday you will” “No, Peter protested, ”You will never ever wash my feet!” Jesus replied, ”Unless I wash you, you won’t belong to me” Simon Peter exclaimed, “Then wash my hands and head as well, not just my feet” Jesus went on to explain that that was not necessary and when all their feet were washed he made sure that they understood that as he, their Lord and Master had been willing to wash their feet, then they must be willing to do such menial tasks for each other.

As with the previous picture this is painted as if you are participating in the event. How do you react to Jesus being willing to do this for you? What are the implications for you of following His example? 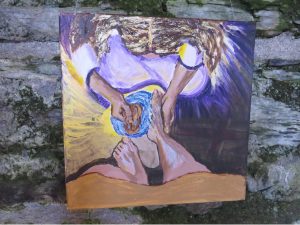 I flinched at the possibility of attempting this theme. However I felt I could reinforce the purpose of Jesus’ suffering by making the nail silver.

Silver is symbolic of redemption i.e. when you pay money to a pawnbroker to get your possession back, you ’redeem’ it.

Therefore we are restored to a full relationship with God by the payment of Jesus’ death.

The first people to receive this are the two figures at the bottom of the picture, representing John and Jesus’ mother.

The letter to the Hebrews puts it like this: “So Christ has now become High Priest……………..With his own blood- not the blood of goats and calves- He entered the Most Holy Place once for all time and secured our redemption forever.”

The following three pictures arose out of the realisation that Jesus chose to accept his fate.

Jesus wrestled with the cup. He knew that he was to be killed by crucifixion and his humanity shrank from the horror.

He prayed ”My Father! If it is possible, let this cup of suffering be taken away from me. “ An angel ministered to Jesus and strengthened Him.

This is represented by the Gold (symbol of Divine kingship) caressing his head. He was not alone. The cup is full of all the sin and brokenness of the world.

Jesus said. “ Yet I want your will to be done, not mine.” Are we in that place? Come what may? 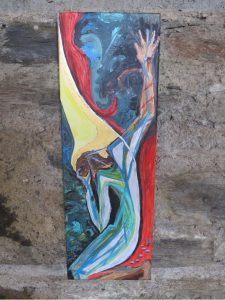 Jesus accepts and becomes the cup of suffering. It wasn’t the nails that held Him there. Luke records in Chapter22 verse 20”This cup is the new covenant between God and His people – an agreement confirmed by my blood, which is poured out as a sacrifice for you” From this cup pours out the water of cleansing and the blood of healing and forgiveness. 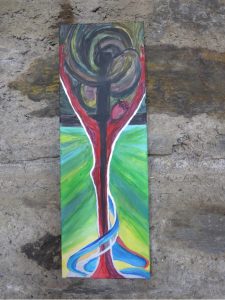 The cup becomes the flame of the Holy Spirit, and the cross, the Sword of the Spirit. The power of the action at Calvary means that chains are broken and people are born into new life because of the love of God sown into their lives. 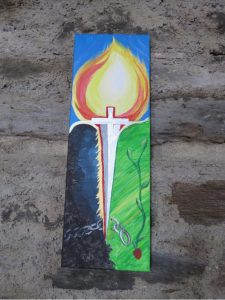 Now, because of Jesus sacrifice and His Resurrection, the way into the presence of God has been opened. Only our acceptance of our need of forgiveness and faith in this world changing event is required. Come into His presence with thankfulness and trust. 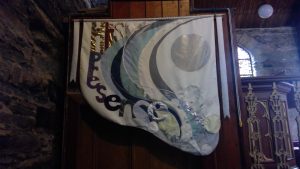 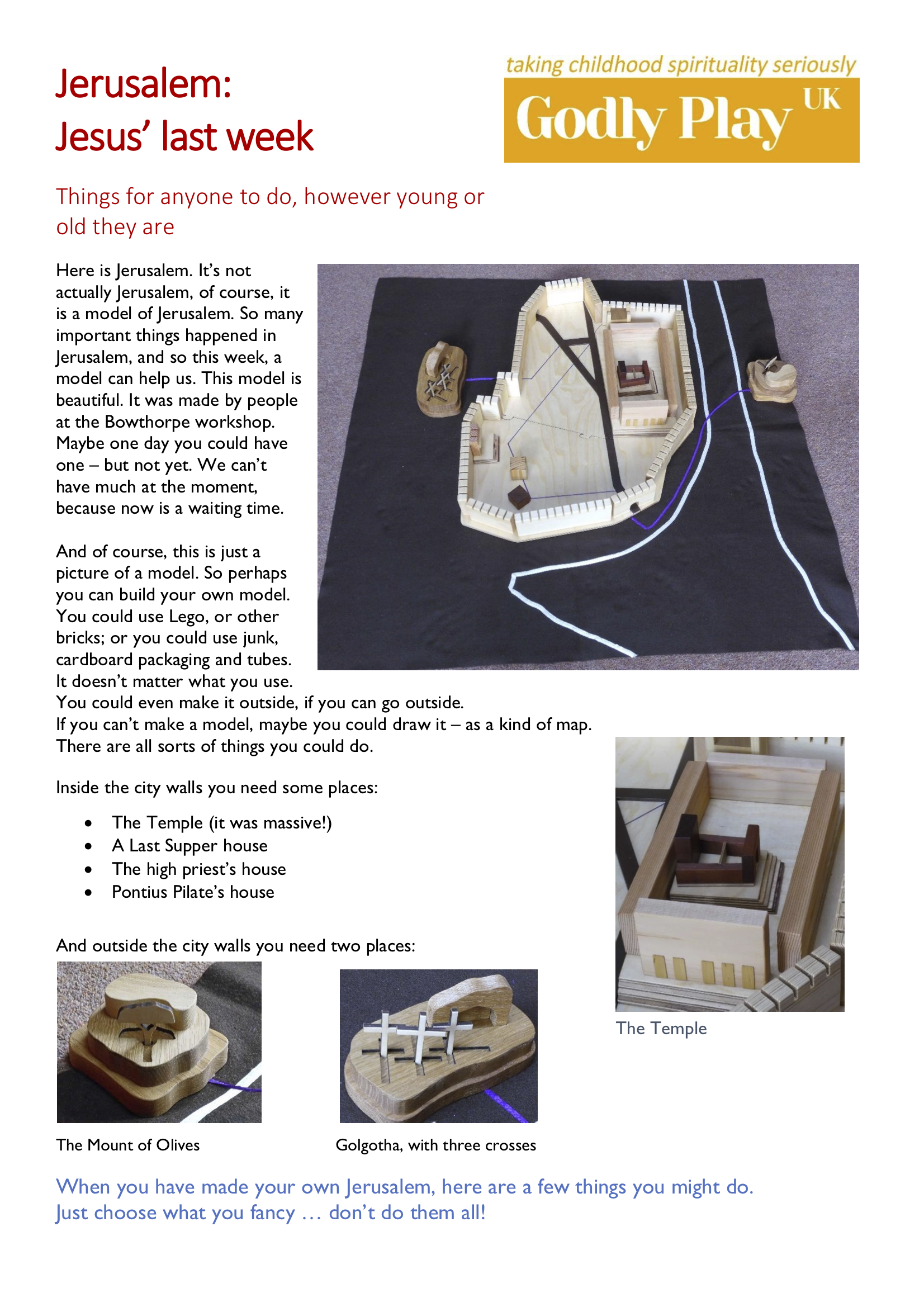