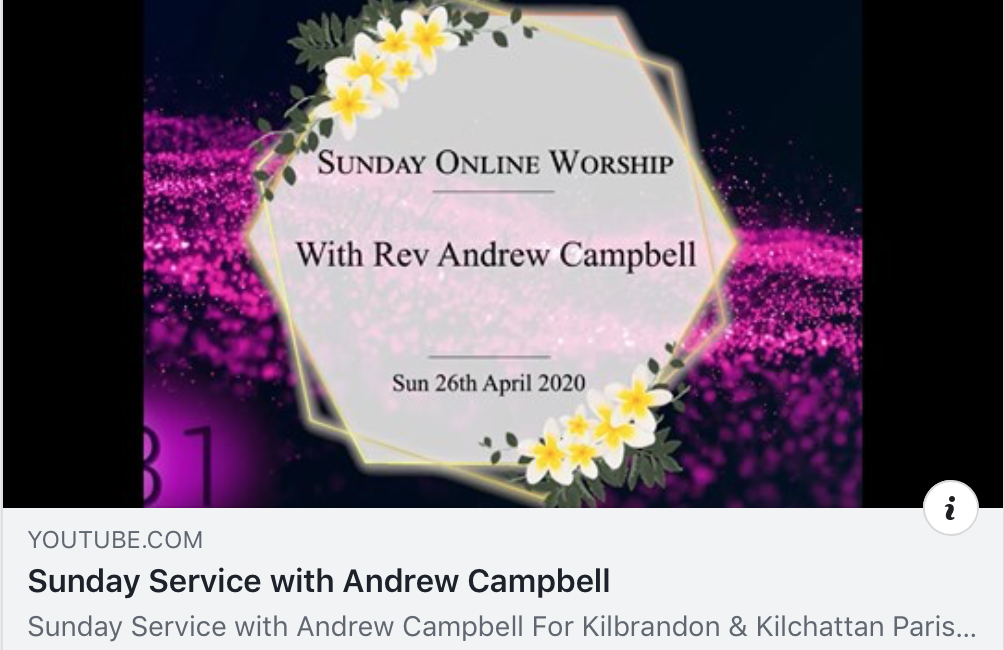 Our online worship today will be led by Rev Andy Campbell. The link is the following: https://www.youtube.com/watch?v=8slVoJZU_BY

If you miss the video when it goes live, or if you experience any kind of glitch, you can always catch up with it later. All our online worship videos remain available for viewing on YouTube.

Creator God; In golds and greens with reds and blues of every hue, you have painted our world in a universe of unseen ultraviolet, and waves of energy that we perceive as radio waves and X rays. Yours is a creation of gases and solids and liquids, but also of sound and spirituality, joy and sorrow, compassion, challenge and contentment – and for you they are all real, all vital, all necessary for the completeness and wholeness. They give you pleasure and they give us life, under your inspiration.

We do not comprehend all of this, even when we write our philosophical, medical and scientific papers, but as we come here today we are filled with a sense of awe and wonder for it all, and for YOU who makes it and keeps it all in being throughout the generations.

Redeemer God, in flesh and blood and living and dying, with tears and laughter,  healing, breathing, you have carved out a place in place and time to engage with us in Jesus of Nazareth, – born and breathing and tearful and teething – sharing our story and giving it meaning. Touching the weary and encouraging the trying, you have walked our way and shown the possibilities and potential for people like us to grow and develop and become intentional reality as create doorways and pathways for us totravel, on that long road that leads to fulfilment which is discovering our source and our destiny which is you.

Unseen God, you trouble us with your invisible presence, as the signs of your working surround us and mystifies us, transforming our certainties into questions and our mourning into dancing. We are never quite sure of where you will take us or where you are at, but there are times when we feel you are right by our side and in that moment, fears disappear and peace wraps around us as a blanket, and for moments we are unsure whether we are in heaven or heaven is here …. And we give you praise for being the God that you are, unreasonable and unbending and mightier than all else.

Accept the praise of mere mortals who deign you deign to call your children. Accept our praise and as we face the reality of your majesty and righteousness, we also pray you forgive us for not being the people you have dreamed of, and for the mess that we make in the lives of each other and the places that you set us.  Forgive us the bitterness, selfishness , rage .

Forgive us the ability to turn our backs on need, and pretend that we do not see. Forgive us Lord for we do know what we are and what we have been doing! Forgive us …..and with pardon bring a desire to please You and the determination to restore your confidence in us, by our actions and devotion.

And this we pray in the name of Jesus who teaches us to prayerfully say:   Our Father who is in heaven, Hallowed be your name. Your Kingdom come, your will be done on Earth as it is in heaven. Give us this day our daily bread and forgive us our trespasses as we forgive those who trespass against us, and lead us not into temptation, but deliver us from evil, for your is the Kingdom the power and the glory for ever,  Amen.

On a dangerous seacoast where shipwrecks often occur, there was once a crude little lifesaving station.  The building was just a hut, and there was only one boat, but the few devoted members kept a constant watch over the sea, and with no thought for themselves, went out day and night tirelessly searching for the lost.  Many lives were saved by this wonderful little station, so that it became famous.  Some of those who were saved, and various others in the surrounding area, wanted to become associated with the station and give of their time and money and effort for the support of its work.  New boats were bought and new crews trained.  The little lifesaving station grew.

Some of the members of the lifesaving station were unhappy that the building was so crude and poorly equipped.  They felt that a more comfortable place should be provided as the first refuge of those saved from the sea.  So they replaced the emergency cots with beds and put better furniture in the enlarged building.  Now the lifesaving station became a popular gathering place for its members, and they decorated it beautifully and furnished it exquisitely, because they used it as a sort of club.  Fewer members were now interested in going to sea on lifesaving missions, so they hired lifeboat crews to do this work.  The lifesaving motif still prevailed in this club’s decoration, and there was a liturgical lifeboat in the room where the club initiations were held.  About this time a large ship was wrecked off the coast, and the hired crews brought in boatloads of cold, wet, and half-drowned people.  They  were dirty and sick, and some of them had black skin and some had yellow skin.  The beautiful new club was in chaos. So the property committee immediately had a shower house built outside the club where victims of shipwreck could be cleaned up before coming inside.

At the next meeting, there was a split in the club membership.  Most of the members wanted to stop the club’s lifesaving activities as being unpleasant and a hindrance to the normal social life of the club.  Some members insisted upon lifesaving as their primary purpose and pointed out that they were still called a lifesaving station.  But they were finally voted down and told that if they wanted to save the lives of all the various kinds of people who were shipwrecked in those waters, they could begin their own lifesaving station down the coast.  They did.

As the years went by, the new station experienced the same changes that had occurred in the old.  It evolved into a club, and yet another lifesaving station was founded.  History continued to repeat itself, and if you visit that sea coast today, you will find a number of exclusive clubs along that shore.  Shipwrecks are frequent in those waters, but most of the people drown!

From here you can see ten lighthouses or navigations buoys. By day you can make out their shape and colours telling you where you are and which way to go, by night they highlight otherwise hidden hazards in the dark that have caused many to perish in the cold and dangerous waters when boats struck rocks and wrecks. Robert Louis Stevenson’s family were responsible for the building of many around Scotland’s coast and the Northern Lighthouse Board in Oban maintain them to provide safe passage to all sorts of vessels, whether they are military,  CalMac ferries, fishing boats, bulk carriers heading for Glen Sanda or pleasure boats likea yacht I crew on many weekends    Oh I know ships now are equipped with radar – gyro compasses – satellite navigation systems and all the other gadgetry of a modern technological era – but the lighthouse and the buoy are still the base level navigation system for sailors – I suppose one of their advantages is that they stay put …..and aren’t dependent on your on board system, which can fail.   I often think we should view the Ten Commandments, in similar vein – as navigation aids that remain constant.  They may be old, but still actually work as we navigate where we’re going in a community.  In fact, most societies would take them on board as good general rules for Society, regardless of politics or religious inclinations.

Don’t kill – don’t steal – don’t always be wanting what the other guy’s got.  These are the ones we always remember – but, there are positives too – what about “Remember to give older folk and those who gave us life itself, a bit of respect”.  It seems to be common-sense if you consider they’re the ones who have more experience and perhaps a bit more wisdom than the younger folk – they’ve had a bit more time to watch what’s been happening too.  Yet, we’ve forgotten the sense, and it is no longer common. And there’s another which says  “Take time out to wonder at this world and its creator, and to pay a bit more attention to both.”  Ecologists across the globe are saying much the same thing – and we’re happy for them to do so – But adhere to the Ten Commandments, : “Here we go…… they’re just trying to spoil our fun again  ….. No!     just do your own thing – it’s alright as long as nobody else gets hurt. We want our freedom.”  .” So be it “, says God. I wonder if what we really say is that we want freedom, and all our rights , without taking individual responsibility to protect those of others.  The ten simple rules no more limit our individuality and freedom than the lighthouses limit the freedom of boats. What they do is   help us to get from where we are to where we want to be – safely.

I’ve been watching the series on TV during Lock down called Rescue at Sea, highlighting the sterling work of the Lifeboats. Sometimes they’re called out to situations which are not only very dangerous but complete accidents which folk could not anticipate or cope with alone. Others however display the ignorance about the sea, and lack of common sense, by people who get into difficulty which could certainly have been forecast had people just thought about what they were doing. One highlighted the rescue of a guy who had built his own small sailing craft and took to the seas without ever having had a sailing lesson, wasn’t a strong swimmer, didn’t wear a lifejacket and hadn’t really tested the boat.   Inevitably he got into trouble, and a small inflatable lifeboat was launched after a spectator on the shore spied the imminent disaster.

Approaching the stricken would-be-sailor, the lifeboat crew were waved off, because the novice sailor firstly thought he would be charged for his rescue, and secondly was determined to get his boat to shore, which the RNLI said they couldn’t do in these weather conditions.

They waited till the guy was completely exhausted and then plucked him from the water and took the reluctant drowned rat to safety.

We recognise the foolishness involved and shake our heads incredulously – yet many people treat the great and gracious God of love  in the same way. He sends out his Son in Jesus to provide rescue for us when we find ourselves in a mess, and many of us refuse to acknowledge that we are in trouble at all – and then are determined to find our own way out – unwilling to accept the free offer of salvation. God keeps making the offer but many just don’t learn and refuse point blank to take hold of the rescue rope that is held out to them.

We’re,  All at Sea – the offer to pull us from the deep is held out to us in Christ , and those who are wise grab that saving chance with both hands and are forever grateful.

Part of our gratitude is to join the rescue team for the sake of others.